Indonesia’s music scene is now amazingly diverse, and not just a reflection of the varied environment, both geological and botanical. From the flood plains of northern Java, to the forested, mountainous tropical hinterlands of the larger islands, the arid east, and the islands of the Mollucas, home of the spices which brought foreign traders, travelling with the trade winds, the Europeans, Chinese, Arabs and Indians, brought their different religions, cuisines, farming and fishing practices to pour into the melting pot that is the largest archipelago in the world.

And their instruments came with them and were adapted with bamboo, woods and metals. Examples include the kroncong, similar to a ukulele, rebab, a one-stringed bowed instrument, gambang, a wooden xylophone, kecapi, Sundanese zither, and suling, a bamboo flute.

Until the Japanese invasion in 1942, western music was largely enjoyed by the Dutch, and from from 1920 a healthy jazz scene (pdf) had developed which stretched from north Sumatra to Sumbawa.

The Japanese occupation and subsequent war against the Dutch who imposed a blockade largely isolated the nascent country from foreign influences. There is an unconfirmed suggestion that there was a jazz group in Yogyakarta c.1948 when it was Soekarno’s temporary seat of government. In the austere post-Independence years, Soekarno viewed popular Western music as decadent and as tainting the revolutionary spirit: nationalism was key.

The years spent incommunicado from the rest of the world meant that the bebop revolution had passed by unheard by local jazz musicians. Seeking an outlet for their muse, they often added Hawaiian and Latin flavours when accompanying singers.

As might be expected, the mostly urban generation who had taken little or no part in the march to independence and had grown up with dogma and austerity sought an outlet for their innate rebelliousness. Elvis Presley and the Beatles offered the needed illicit excitement. And much like parents the world over who criticise their offspring by reminding them of the struggles they had undergone “for the likes of you”, Sukarno issued edicts banning the “decadent” music forms in the name of nationalism, and his soldiers were allowed to cut the hair of youths with Beatles fringes. However, singers such as Lilies Soerjani and Bing ‘Crosby’ Slamet were known for being close to the President, and they performed pop music with Western instruments and modern taste.

Sidenote 1: Punks in Aceh suffered similar treatment just six years ago.*
Sidenote 2: The Beatles (and Cliff Richard!) were also banned in Israel because of the fear that “from the west would come a bad wind of sex, alcohol and rock’n’roll.”
Sidenote 3: In 1965, children of Kostrad soldiers, Indonesia’s elite fighting force then headed by Suharto, made an album which included ‘Girl’, a song on the Beatles album Rubber Soul. Download the album from here. 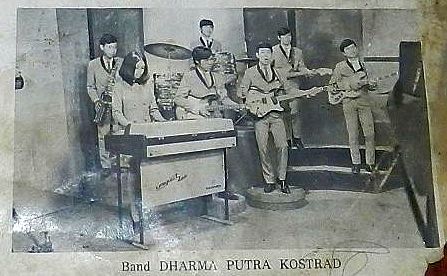 When Suharto took the presidency in 1966, Indonesia courted western capital flows, such as from Freeport, to pay off the debts accumulated by Soekarno. This also opened the floodgates for western popular music.

In 1967, the ballad singer Bob Tutupoly, released an album of very cheesy songs in English which strangely featured a cover of Jimi Hendrix’s Stone Free.

Perhaps that was the track which heightened interest in western, and mainly British, ‘progressive’ music. Many current ‘senior’ musicians cite the record collections of their fathers as inspiration for their own paths, The late, and sadly missed, Riza Arshad told me that in 1975 when he joined his brother Luke’s band art/rock band Rara Ragadi, groups such as Yes, Genesis, ELP, Gentle Giant, the Who, and, of course, the Beatles were his major influences.

In a 2014 interview for Vintage Guitar magazine, Dewa Budjana said that jazz-rock fusion and progressive rock were his basic and main influences, “I am very into John McLaughlin, Allan Holdsworth, and Gentle Giant, and I like Steve Howe from Yes a lot.“

The seventies in Indonesia saw little jazz of note; what was needed was entertainment and rock and prog-rock provided that. Bands with long-haired musicians playing loud music was more appealing than cerebral grooves which can’t be sung along with.

Indonesia’s prog-rock scene of the 70s was the cultural coming of age for the post war generation here as it was in the UK, the USA, Europe and other less-isolated countries. It is good that international attention is now being paid to it, in part thanks to the 2011 compilation Those Shocking Shaking Days – Indonesian Hard, Psychedelic, Progressive Rock and Funk: 1970-1978.

And my compilation completes the decade.

1970. Shark Move – My Life
Benny Soebardja wrote and sang this. A suling opens this almost pastoral track before it rocks on.
1971. Harry Roesli Gang – Don’t Talk About Freedom
Musician and social activism were at the core of Roesli’s short life.
1972. God Spell – Pusara
From a never released promo for radio.
1973. Ariesta Birawa Group – Pergi Pacaran
fr. Pop Matters
“The news media can sometimes make Indonesia look like a sea of anonymous fundamentalists planning to strap bombs to their chests and commit suicide around tourists, but when you’re with Ariesta Birawa Group it’s all peace, paisley, and devoted lovers holding hands and celebrating “the song we make every day.”
1974. Ivo’s Group – Sampai Hatimu
Ivo Nilakreshna’s Group
1975. God Bless – Friday On My Mind
Still going today, founded by Ahmad Albar, more rock than prog
1976. Jack Lesmana All Stars – Silence for the Buffalo
This track is a live recording converted from a YouTube, w. Jack Lesmana (gtr), Bubi Chen (keys), Benny Mustafa (dr), members of Indonesian All Stars who, with Tony Scott, recorded the seminal jazz album Djanger Bali in ’67.
1977. Giant Step – Mekar
w. Benny Soebardja, voc. gtr,, “Godfather of Indonesian prog-rock”, founder of Shark Move (#1 above), and Triawan Munaf, keys, now head of the so-called Creative Economy Agency
1978. Abbhama – Indonesia
“The talented keyboardist Iwan Madjid was clearly influenced by Yes, Genesis, ELP and all the Symphonic icons.”
1979. Harry Sabar Friends – Kemarin Dan Hari Ini
The line up included the Nasution brothers who were in the band Gypsy on the seminal album Guruh Gypsy, downloadable from here (courtesy of Keenan Nasution). Debby Nasution is on the new Benny Soebardja’s Giant Step album, Life’s Not The Same. 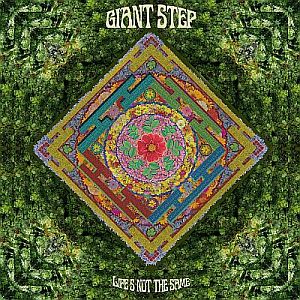 Review and Bandcamp(in all formats)

‘Bonus‘: fr. 1979. Black Brothers – Saman Doye
Black Brothers was a well-known group from Jayapura, West Papua. Their music, sung in Indonesian and Tok Pisin, included influences from reggae and political elements inspired by the Black Power movement. The group went into voluntary exile in Vanuatu in 1979, protesting Indonesian policies in West Papua. They later moved to Papua New Guinea and were .the most popular musical group during the 1980s.

If you can find any 70s Indonesian prog-rock albums in mint condition, be prepared to pay a lot.